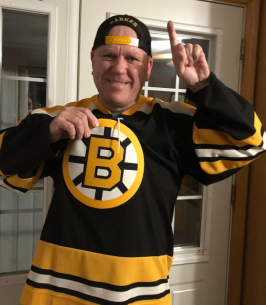 It is with great sadness that the family of Dennis David Glenn announces his peaceful passing, with his daughter at his side at the Dr. Everett Chalmers Hospital on January 12, 2022 at the age of 52 years. Dennis was born in Minto, NB on May 3, 1969 son of the late John and Verna May (Hopkins) Glenn. He is survived by his daughter Chelsea (Tyler Walden); grandsons, Parker Caines and Owen Walden; his partner Charlotte Smith; brother Kirkland (Gwen) Glenn; sister Caroline (George) Bailey; half sister Sandra Spinny; nephews John Bailey and Jonathan Glenn; nieces, Nicole Bailey, Melanie Glenn, Lana and Lilly Stewart.

Dennis was one of the strongest guys you could meet. Even after all he had been through he always kept an upbeat attitude and kept fighting until the very end. He was one of the nicest people you could meet, and left an impact on almost everyone who met him. He would always be there to lend a helping hand no matter who you were, or to be a listening ear and someone to lean on.

Donations in memory of Dennis made to Hockey Fights Cancer would be appreciated by his family.