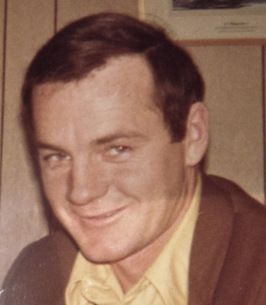 Joe Lamb of North Forks, NB passed away unexpectedly on August 21. Born on April 6, 1939 in Salmon Creek, NB he was the son of the late Charles and Sibbald (Darrah) Lamb.
As a young man Joe was an avid athlete, playing basketball and baseball and was on the Baxter Dairy industrial baseball team the year they won the Maritime Championship. Throughout his life he also enjoyed golfing, canoeing, gardening and fishing.
Joe’s career path took him from working in the Chipman woods as a young man to managing two gas stations in Saint John to eventually joining several of his brothers by becoming a private operator delivering milk with Baxter Dairy. Joe’s devotion and strong work ethic often meant enduring long hours and sometimes terrible weather conditions, but aside from taking one day to recuperate from a broken collarbone, he never missed a day of work. His devotion to his work and his customers earned him great respect.
Once his working days were over, retirement allowed Joe to focus on his true passion: immersing himself in the great outdoors and nature. He was an avid canoeist and fisherman, his favorite spot being the Cains River. He also became very skilled at producing maple syrup, something he enjoyed so much he named his beloved dog Maple.
Of all his interests, Joe’s true devotion lay in managing his 250-acre woodlot in North Forks. His impressive skill and knowledge at incorporating the latest in forest management practices was recognized when in 2007 he was awarded Woodlot Owner of the Year by the NB Federation of Woodlot Owners.
Joe is survived by his former wife, Donna; his daughters, Lee (John) of Ottawa and Lisa (Errol) of Mt. Mellick; brother, Chelsey Lamb (Joan) of Chipman; sisters-in-law, Audrey, Betty and Beulah Lamb; as well as many nieces and nephews.
In addition to his parents, Joe was predeceased by his brothers Alexander, Benton, Lauchlan, Clayton, Goldwin and sisters Bernice and Georgina.
At Joe’s request, there will be no visitation or service. For those who wish, donations in Joe’s name may be made to an animal shelter or rescue organization, or to a charity of the donor’s choice, and would be appreciated by his family.
Arrangements are in the compassionate care of Chipman Funeral Home Ltd. & Crematorium. (339-6612) Memories and condolences may be shared through www.chipmanfuneralhome.ca.