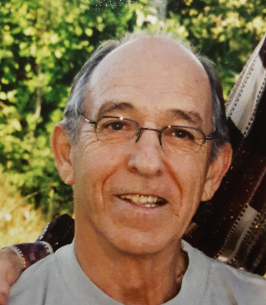 It is with sad, yet grateful hearts we announce the death of our dear father and grandfather on Saturday, December 11, 2021 at the Veteran’s Health Unit in Fredericton, at 90 years of age.

The world received the gift of Joseph Magloire Antoine (Tony) Boucher on August 21, 1931, a longtime resident of Boiestown, in the house ‘up on the hill’ which he loved and truly never wanted to leave.
He was the youngest child of the late Magloire and Julie (Maillet) Boucher of Rogersville, NB. Tony loved to spoil his wife, the love of his life, Georgena (Ross) Boucher, to whom he was married for over 67 years and who predeceased him by four days. He was also predeceased by five sisters: Marie, Evangeline, Philomene, Helené and Bertha and by four brothers: Pierre, Francois, Jean-Baptiste (WWII) and Laurent.

Tony is survived by three loving children, Michael (Cindy), Sandra and John (Bill); two grandchildren whom he loved, Kyle and Chantal (Jeremy). Tony will be sadly missed by his dear sisters, Theresa and Yvonne of Rogersville; many cherished nieces and nephews. There was a place in his heart for everyone.
Tony joined the Canadian Armed Forces in the early 50’s and after Basic Training crossed the Pacific to the Korean Conflict where he served for 13 months. Tony loved the military and wore the uniform with great pride. One of his favourite postings was to Washington, DC where he worked in the Canadian Embassy and in the Pentagon. He had so many stories about the good times and the wonderful friends he’d made over the years. Tony proudly wore his medals on Remembrance Day on his blue Korean sport coat, marching proudly with his fellow Veteran’s from his time in service to his country. He could still smartly salute that distinctive Canadian Armed Forces snappy salute even in his late 80’s.

After leaving the military, Tony bought a Fargo truck and started hauling forest products working long days and longer nights. In the late 60’s he worked on the Mactaquac Dam where he ran every piece of gear they owned. He was an amazing heavy equipment operator. In 1973 he started running a Drott 40, loading trucks for J.D. Irving in Deersdale in Central NB. It was the start of a long and happy career with JDI. He worked as a camp and woods foreman and his men knew he was honest and always fair. He treated his men with respect and they respected him. Later in his career he worked throughout the Maritimes with J.D. Irving. Dad was a proud “Irving Man”. He worked in many capacities until his retirement at almost 70 years of age, still working after supper as “there are always things to do”.

He was a man of conviction and strong faith. A longtime member of the Boiestown Pentecostal Church, he served on the Church Board and was Secretary-Treasurer for over 25 years when he retired from these duties. He loved his church family but he loved his Saviour most of all.

Tony enjoyed life. Although busy he always carved out time for singing, fishing, hunting, travelling, and spending time with his family. He loved to play guitar and sing at home and in his church.
At his request there will be no service. Tony and Gena will be interred in the Boiestown United Church Cemetery next to his beloved in-laws, Roy and Ivy (Carson) Ross. In Tony’s memory donations made to the Dr. Everett Chalmers Hospital Auxiliary Inc. - Fredericton Veteran’s Health Unit or the charity of the donor’s choice would be appreciated by his family.

Arrangements are in the compassionate care of Chipman Funeral Home Ltd. & Crematorium. (339-6612) Memories and condolences may be shared through www.chipmanfuneralhome.ca and donations can be made directly from the funeral home website.