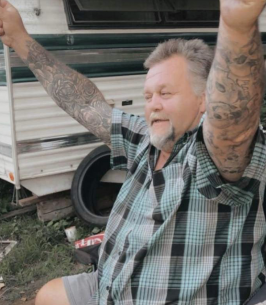 It is with heavy hearts that the family of Wayne Joseph Meyers announce his passing surrounded by the love of his family on Saturday Oct . 1, 2022 at the Dr. Everett Chalmers Hospital. Wayne was born in Minto NB on February 23,1968 the son of Linda Toussaint and the late Morris Meyers.

Wayne loved the outdoor life, fishing hunting, 4-wheeling, ski-doing. He loved reading the world news. He was a cement finisher by trade. His daughter and grandchildren brought so much joy into his life. He was so proud of them.

We would like to send a huge thank you to the palliative care staff at the Dr. Everest Chalmers Hospital. They were so caring and wonderful to Wayne and to his family, thank you from the bottom of our hearts.

A private service will be held at a later date by invitation only. For anyone who wish to make a donation in Wayne’s memory, a donation to a school breakfast program would be greatly appreciated.